Featured Application: This Replica of the 12th Green at Augusta, Courtesy of Task Masters in Minnesota

This week’s Featured Application comes to us from Task Masters in Minnesota.  Chris Deanovic and his team designed and installed this beautiful replica of the 12th green at Augusta National for a homeowner in Dayton, Minnesota. 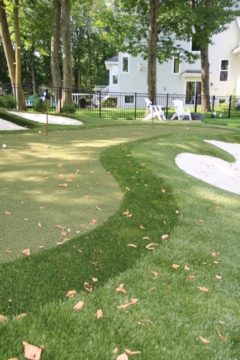 The project was part of a complete backyard renovation.  The Task Masters team overhauled the entire space.  They built a bridge that stretch across a new water feature.

The putting green was part of more than 3000 square feet of synthetic turf  on this project, which also incorporated natural grass and concrete pavers. 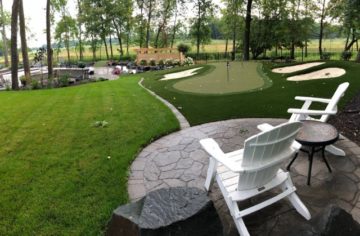 The team utilized five different products in the design.  The putting surface used 500 square feet of STI Tour Shot, a sand filled product that can hold a shot from up to 100 yards.  The green was infilled with about five pounds of sand.   They wrapped the green in a first cut fringe of SoftLawn® Bermuda Blend.  Kentucky Blue Plus was used for the taller second cut.  Over 1500 square feet was used to enclose the putting surface, fringe and bunkers. 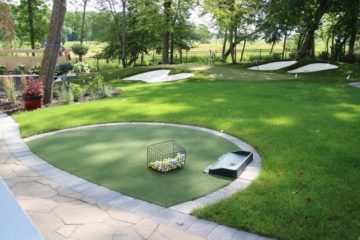 The install team also placed EZTee® mats in two locations to provide different angles into the green. The longest shot is about 45 yards and the shortest is about 20 yards. 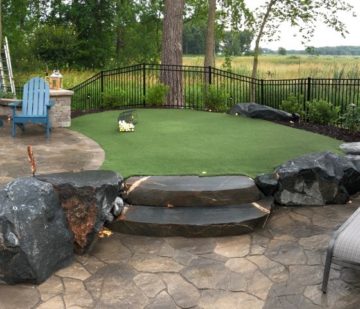 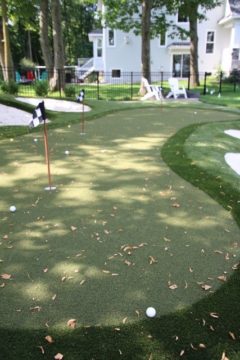 “The homeowner loves the putting green, and also the backyard curb appeal it has brought to the property. This was a really fun project to design, and to see it all come together like we envisioned is quite satisfying,” Deanovic said. 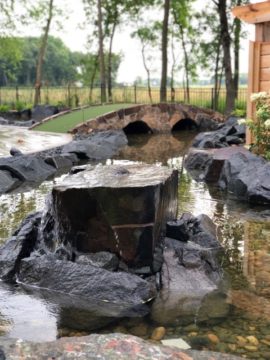